It’s so nice not having to worry about doing Murph today! Out in the garage around 10:30.

Got the lawn cut and heading out to play 9 holes of golf.

Hard to try an catch your breath holding a sandbag on your chest. haha High speed burpees all the way. The overhead hold was miserable. Missed a dub at 17 in round one and at 53 in round three. Three unbroken sets of 60 is great for me!

This was a grinder! I slowed a bit between some sit-ups, but otherwise went unbroken, which was not easy at all. Finished in 8:27.

Rested yesterday, while watching my nieces for the night. It was nice to have the day off exercise after 21.3 and 21.43. Out in the garage by 2pm I think.

Worked out with B, each doing the assigned reps per movement (she had some differences in calories). She started and we both got through 5 rounds plus she got two swings. This was a good one to just move. Will be taking it on the easier side to recover from the three weeks of the Open.

Watching the leaderboard to see if I stay in the top 10%. Looking good right now.

It was 70° so for the abs and conditioning we went out on the patio.

Not used to that sun! This was a lot of volume for the legs.

Each year I update my own spreadsheet with my Open workout rankings and calculate percentiles. If you use the iOS CrossFit Games app they calculate percentiles based on the number of registered athletes in the division, which I think is quite dumb because some people register and never post a score. I’ve always done my calculations based on the number of submitted scores. Here’s how my placing looks after week one.

One of my goals each year is to hit the 90% or in the top 10% of participating athletes. That’s well within reach for the Masters division and all I have to do is stick around that placement to get there. The top 10% move on to the Age Group Online Qualifier. I wasn’t sure how CrossFit would determine the %, but according to a video they posted yesterday, I’m right under the cut line. So their using all registered athletes.

Out in the garage at 4pm.

A repeat of 17.1, which I did twice that year. In my first attempt I got through 215 reps (10 short of finishing)
and then I finished in 19:15. When this was announced as a repeat I wasn’t excited at all; it’s horrible on my back and that’s a lot of dumbbell snatches for a bad shoulder. On the bright side I weighed in at 206 pounds this morning compared to the 214 I was for that redo in 2017.

My plan of attack was pretty simple:

I knew my first split was behind that 17.1 redo and felt like I was dying every round of burpees. Turned out I was also behind split after the second round, I started closing the gap in round three, and then really made up ground in rounds four and five. I did all sets of 10 snatches until the 50 where I did 14-12-12-12. Finished in 18:30! Brandi really pushed me through the second half of this workout. Here’s my scorecard as well as comparing my splits between all three times I’ve done this workout.

Analyzed the video for more splits…

I was dead after I finished, but recovered pretty well and was able to do some ab work.

This was rough on the upper abs, holding the upper body up so much. B got it and modified a bit from DLB.

Really felt this one the upper abs.

The kick-ups went well after nearly a week break.

Not a great night of sleep. Workout at 4pm.

Got 2-3 solid holds with my feet off the wall. Progressing!

The work is done by each person before moving to the next movement. I went first and got through 8 full rounds plus row. Handstand push-ups felt really smooth. My balance and cycling were feeling much improved from the handstand work.

A good one from Ibex Training.

My upper abs felt like they were cramping in the middle of round two. I forgot to note the exact time but it was around 7:10-7:30. 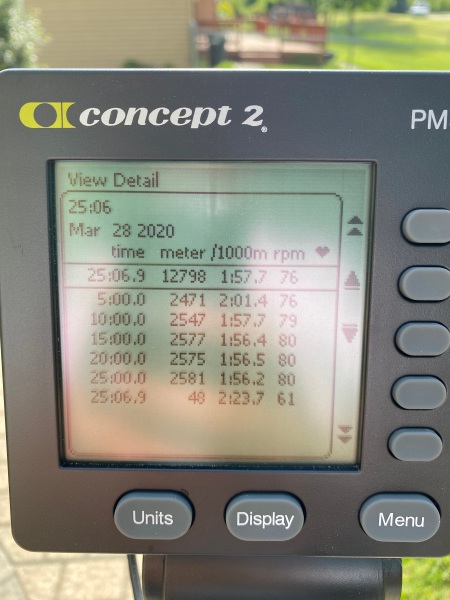 The bike is really quite enjoyable for stuff like this. Nice to get some sun too. Was hoping to have time for a 30 minute ride, but I did not.

MAX Butterfly Pull-ups
Had to beat 30 from May 24, 2016 and smoked it with 42. It wasn’t even really my pull-ups that gave out (all butterfly), it was the breathing! I think I could hold on and even switch to a regular kip if needed and get around 50.

Why are these so hard?

Switching things up and going heavy for a few weeks.

I increased 5# more than I used couple of weeks ago. Last time, with the lighter weights each set, I hit 12-12-12-20 for my drop sets. Today I did 8-10-10-12, also with the shorter rests since we are helping each other adjust a dumbbell weight.

I finally used the handles I bought three months ago! I was thinking they were 75# carries, but had forgot about the weights of the handles, which are 8# each.

While getting out some jerk blocks as a resting place for the handles, I dropped one down the same leg I got bit by the bike with the other day. Hurt so bad and had a big goose egg right away.

Now heading to Leaman’s Apple Barn to get treats for one of their Cider Sundae Fundays!