Feeling fine after yesterday, other than the lingering issues I have. This stupid shoulder has been acting up for a few weeks, but luckily hasn’t been an issue for any movements.

I was trying to keep my pace around 1:45 on my rows and just keep moving at a decent pace through the movements. First time really doing any squats in 2 weeks. We got done around the 17:40 mark and made it through 13+7 on the circuit.

Went all the way back to the ground on the first round of tosses, but only to parallel on the next 2.

I actually felt better than I ever have on the ring rows and it’s quite a bit harder on the box like that. Progress!

Had the day off work today since House of Cards season 3 was also released and I knew I wouldn’t be able to concentrate on getting any work done along with that and thinking about the Open. Got to the gym just before 5:30 and started warming up.

I came up with a strategy and couldn’t have executed it any better. Went 4-4-4-3 on all rounds of T2B except at the end when I went 5-3 to finish. I’d drop from the bar, take a step, turn around, and get right back up. I did all of the deadlifts unbroken, but slow and with controlled breathing as almost a rest period and so that I wouldn’t spike my heart rate. I did all single power snatches, but was right on the bar as soon as it settled on the ground. Grip didn’t become an issue and my hips were just starting to fatigue in the last full round. I think if I had gone 5-5-5 like I was thinking last night, I would have had to break them up more than that in about the 4th round. I ended up getting 5 full rounds plus 8 toes to bar for 158 total reps. My goal was to get 5 rounds, so I’m really happy with that.

I quickly put my shirt back on for the grip on the bar on my chest. Loaded up 207#. After waiting almost 2 minutes, I power cleaned it, and push jerked to get on the scoreboard. Then I changed up my original plan because I knew the jerks were going to be shaky. I had planned on doing 227-237-247, but wanted to make one less attempt than that. So I went right to 237#, which was the minimum I wanted to hit. I quickly changed into weightlifting shoes and put on the belt. Made that attempt with about 2 minutes left on the clock. Power clean again, but split jerk. Put 247# on the bar for the last attempt and waited until 20 seconds left. Power clean again and a pretty shaky split jerk, but I controlled it and made the lift. Success!

Really happy with my scores for week 1. All of the gymnastics work we’ve been doing on the bars has paid off. My grip wasn’t an issue at all and my T2B didn’t die out like they have in past years.

Went to the gym before the 15.1 announcement to get my row on.

Tried to keep a really low stroke rate, but get in powerful pulls. It made the effort a lot easier and was pretty simple to keep a steady pace.

I like the double workout for 15.1. Will be interesting to see what my C&J looks like after a 9 minute AMRAP.

Had a chiropractor appointment in the afternoon, so went to the 5:30 class. Was there early so started early. I did Crossover Symmetry Activation to get started.

I did the set of 60 as touch-n-go, but dropped the rest. For the doubles with 75 I was going about every minute and probably close to that for the singles with 80 too, but wasn’t paying as much attention to the clock.

This was programmed with OHS, but still not squatting so I substituted the snatches and did them all unbroken. Finished in 7:56. Evil wheels are slow for me because of my length and reach.

My double unders are hot! Wasn’t close to missing any. Finished in 4:06. Probably would have been a good day for an “Annie” PR.

Second week of the bench program. Stayed a little conservative with a 10#, when it said to do 10-15#. Felt good. May make a bigger jump next week.

Can’t wait for the big 15.1 announcement tomorrow! Will probably do an easy 20 minute row before watching it at the gym.

Went in for the 9am. Warmed up my shoulders with Crossover Symmetry Activation.

Figured I’d wait to use the legs until I needed to. Build more upper body strength through the warm-up sets.

Rough going on those 10 singles.

Thrusters were programmed in the workout, but I’m still staying away from squats, so I did clean & jerks instead. Most reps were actually a push press. All sets were unbroken. Went 5-5-5, 4-4-4, and 5-4 on the ring dips and finished in 5:23. Not so fun doing the ring dips after all the muscle-ups and push-ups fried the needed muscles. It was fun doing some C&J at a lighter weight for a change of pace.

I rested a little and then stuck around to get in some more work since my Air Dyne is still broke and it’s so damn cold out I don’t feel like warming up the garage later. Nice to be done for the day too.

I was going 85 rpm and higher every round. Racked up 515 calories and went 6.76 miles. Did Crossover Symmetry Recovery before I left.

Took a break from work in the evening and knocked out some planks. Did these on my elbows because after the workout this morning my shoulders and wrists didn’t need the extra strain that comes from doing them on your hands. After seeing Michelle hold a 6 minute plank without even struggling, I’ve become a little obsessed with these. Body size probably helps her a lot because I start shaking 45 seconds in. No excuses though! Improving core strength is never a bad thing.

I’m surprised my shoulders and upper back aren’t in rough shape today. I can feel the lunges in my ass, that’s for sure. 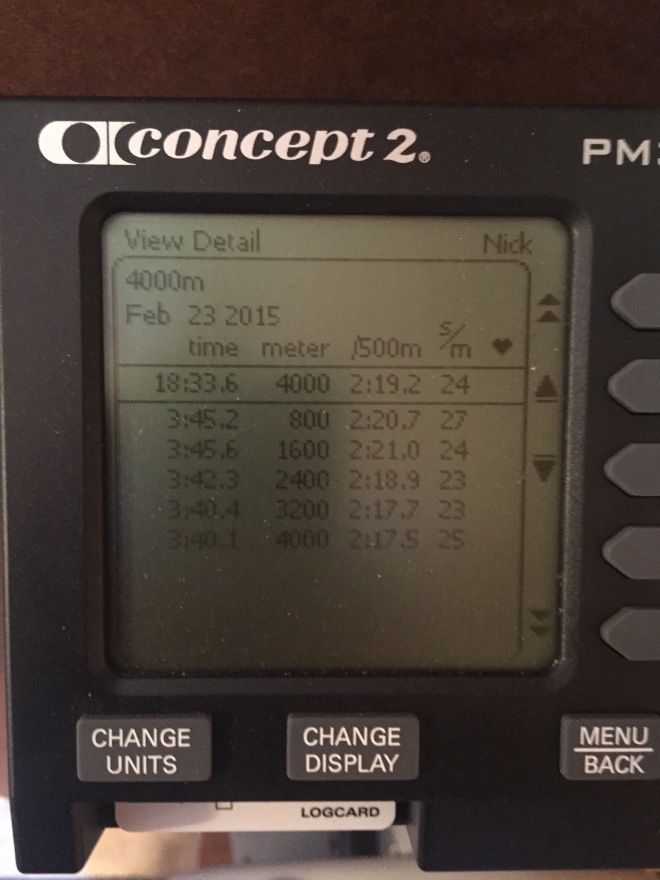 Moved Super Sunday to noon instead of 11 starting today. I warmed up with a 1,000m row in 4:28 and various stretching.

Got 11 in the first minute, then fell off pace a bit, but wanted to get to 40, so I stepped it up in the last minute and managed to get 41 total.

Shoulders = wrecked! Did Crossover Symmetry Recovery. Switching me schedule again so that Monday and Thursday are rest days. Will be doing the Open workouts on Friday nights.

Today we did a benefit workout to raise money for a 22-year-old student from CrossFit Bay City. She had a stroke a couple of weeks ago.

Did all singles on the bar and tried to get back on it for the next rep. Finished in 13:34.

My back is really tight. Ugh.

Went in to the gym at 9 to row, since my Air Dyne is broken and just ordered the new parts yesterday.

Did a bunch of rumble rolling after and then 3x15x210# Reverse Hypers.

Didn’t make it up for the 9am since I was up late watching the Duke – North Carolina game. Little conditioning work in my office before lunch.

I used the ceiling and did a double palm touch to it. Wasn’t wearing shoes and was about an inch shy of being able to touch with my finger tips, so the palm slap should have been higher than the 6″ standard. All rounds done in 26 seconds or less. My lungs were really burning after that!

Felt my low back pull during the 3rd rep with 465. Sonofabitch!! Worked up a little faster in weight than I normally do for some reason. Hopefully I feel ok tomorrow.

I think I had 2, maybe 3 total misses. Took me 2:55. Tried a few triple unders after catching my breath.

Made sure to get back on the Reverse Hyper for another 3x10x210# after those deadlifts.