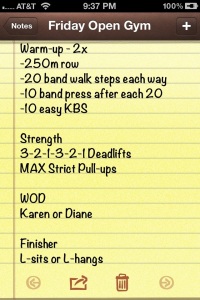 Even though I said I was only going to get on the scale once a week, I couldn’t help myself. I’m down another pound and a half to 173.5 and body fat is now at 15.1%, which is a 0.8% drop from Monday. My goal for the challenge is to hit 14%, which means I need to average less than 0.5% per week the rest of the way. Seems doable, but it gets tougher as your body fat gets lower. I’ve had some real cravings for sweets at night this week, so it’s a good thing I don’t have any in the house.

At the gym I did a quick test with the handheld device and it showed my body fat down to 10.8%, which is good news because I was skeptical of the initial 12.3% reading it gave on day one of the Paleo challenge and is what will be used for my scoring.

I took a well-needed rest day yesterday, but did get out and walk 18 holes of golf. On Thursday morning, while laying in bed, I came up with my workout for open gym time today. Here’s a screenshot of the note I made on my iPhone. As you can see, I made a few changes

I used a 53# KB and did American swings.

I started out on the bar for the first one, but my hands were not feeling the greatest from heavy deadlifts, so hanging on the bar wasn’t the greatest idea. I didn’t time these, but they were better than I’ve done them in the past. 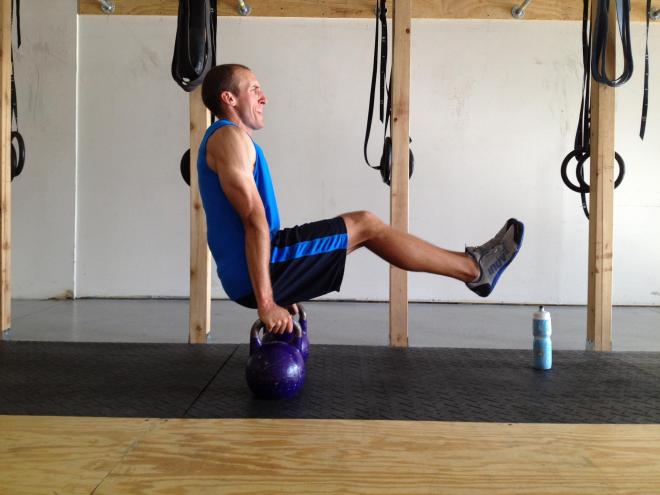 The few people who came in for open gym were messing around and talking, so since the classes worked on some HSPUs today I figured I’d get in a bit. Got 10 (PR) on the first set and then 8 and 6 I think. These have come a long way since I left Phoenix. I don’t think I was even doing any Rx there. Dropping some weight helps too!

That was fun. Got to work on a bunch of stuff today.